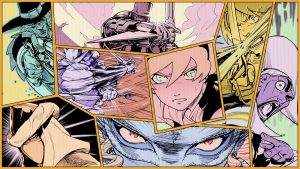 There are many people that try to make their way in manga from outside of Japan. Some of them get published in their native countries, but very few are selected to work as mangaka in Japan. It is said that they will never be respected as well as japanese ones. It is also believed that reach the “manga Mecca” is hard and should be appreciated.

In 90’s Spain first mangakas appeared. Everything started with ‘Sueños’ from Glénat, and the list of spanish manga artists was growing progressively: Javier Sánchez, Rafael Sousa, Nuria Peris, Vanessa Durán, David Ramírez, Ismael Ferrer… But the same happened in Latin America. Many artists achieved local success, notoriously in Brazil -the ‘gaijin’ country which has the maximum presence in Japan.

Some japanese book publishers noticed those movements, so they acted. For japanese readers it was attractive to see foreigners working in manga. Kodansha, like many others, began to make it possible. They created the Manga Fellowship Program, sort of a quick entrance to the publishing in the japanese market. Currently, the most successful manga is french.

Since then, the popularity of foreign manga has seen highs and lows. However, there is a strong little market around it, having its most representative symbol in the International Manga Award, the greatest opportunity to any ‘gaijin’ for work in manga for japanese people. One great example of the success in this tourment can be found in the video below.

One thought on “Can you become a foreign mangaka?”